A short stay at the LVR site in Bedburg-Hau, a brief stopover in the Ringstrasse street in Kleve, another stop at the Rhein-Waal University of Applied Sciences – and then one or two additional stops in the Kleve district. The days in Dr Roland Blasig’s calendar are varied and jam-packed. He is a German lecturer at Scientific Freshers. “For me, motivation is the name of the game in the work that I do – both when learning and teaching”, says Roland Blasig who describes himself as an impatient teacher. “However, when motivation is recognisable amongst interested students who are willing to learn, then the subject itself actually becomes a side issue.”

He is a lecturer in the German department and in this role imparts knowledge of the language to his students – at a very high level. “Our programme prepares future students for university.” In order to be admitted to university, they need to reach a certain language level. The students prove that they have successfully mastered this challenge by passing an examination at the end of the preparatory programme. A sound knowledge of the language and being able to use it confidently, coupled with intensive preparation in the subjects of Mathematics, Economics or Physics, are the perfect foundation for a successful course of study in Germany. Equipped with these skills, the students leave Scientific Freshers after about a year to begin their university studies and embark upon a new phase in their lives.

Road to success – with detours

His path along the road to becoming a teacher has taken Roland Blasig along many a rewarding detour. After being born in Erkelenz and growing up not far from Aachen, Roland Blasig, now 50 years old, studied Metallurgy and Materials Technology at RWTH Aachen University. Five years later, he completed his doctorate at the University of Saarbrücken before moving to the Dutch town of Eindhoven with his wife and four children where he stayed for another five years. Roland Blasig, who was working as an engineer at the time, was employed as a glass technologist at Philips and involved in the production of monitors and working with glass furnaces. Within the company, he then transferred to Aachen where he remained until flat screens had conquered the market.

As part of an advanced training course in the Quality Management Area, Roland Blasig did an internship at the BMW car manufacturing company in Munich. “That turned into five years, much longer than originally planned”, Roland Blasig, who now lives in Kleve, says when looking back. During this time, his wife moved into a house in Kleve with their four children, all of whom are now 16 years of age or older. For the family man, two more years as the head of the department for fibreglass development followed before he finally turned to teaching. “At that time, my wife became self-employed teaching both Dutch in Germany as well as German in the Netherlands. I originally helped her by taking on some administrative tasks before going on to assume teaching responsibilities”, he says when remembering how it all started off.

Today, Roland Blasig runs his own language school on a full-time basis. One of his activities is to convey a knowledge of German to doctors from abroad. He lectures on German at the Rhein-Waal University of Applied Sciences. The head of the language centre at the university pointed out to him that Scientific Freshers was looking for lecturers. “At that particular point in time, a new team was being put together in Bedburg-Hau which meant that I was involved right from the very start.” 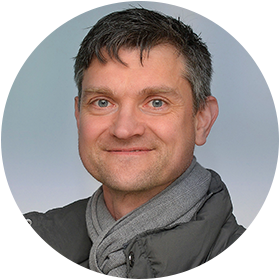 There is no such thing as a typical working day for Roland Blasig. “I spend most of my time working at and for Scientific Freshers. Every day, I teach until lunchtime in Bedburg-Hau.” However, he is far from thinking about finishing time then because this is followed by classes at his private school. “Most of my students are doctors from abroad and class times are adjusted in keeping with their working hours”, the very busy teacher states. Currently, classes at the university are held on Mondays. However – like many of his appointments – this may also be changed in his dynamic calendar. “Classes at Scientific Freshers run from October to May. In the intervening period, there is a stronger focus on the work at my own language school.”

When answering the question as to whether his heart burns for Scientific Freshers, the former engineer clearly replies “Yes”, because the concept behind the institute inspired him right from the outset. During his former activities in the engineering sector, working with people was secondary. “At best, technical problems were discussed together in the team”, he remembers when looking back. “Today, people are at the centre of focus: Each of my students absorbs the material that is being conveyed in a totally different way. That is what makes teaching so interesting. Feedback is immediately recognisable – and that is exactly what I need in my work.”

Here, he encounters a huge range of different characters, the histories of whom he automatically gets to grips with. “Their educational paths and backgrounds are totally different. In our joint classes, some of them start completely from scratch. Others immediately understand the content and can implement it straight away.”

Where will he be playing in the future?

The organ and the piano are two instruments with which Roland Blasig likes to occupy himself in his leisure time. Apart from music, his house, garden and the natural surroundings, where he likes to go on walks, also play a major role. “Of course, I also spend as much time as possible with my children and good friends”, adds the father of four. After several stops along the way, he has now found his place in the occupational world. He wants to continue to grow with Scientific Freshers and to carry on imparting knowledge of the German language to students and pupils in the future. “I want to get away from the idea of teaching dry knowledge from books. Those learning the language should be able to speak and write it in everyday situations.” During the course of time, the lecturer has experienced how future students are now coming together from more and more different cultures. “Thanks to this cultural variety, the individual group members are really forced to be open when it comes to foreign cultures and languages. That will also make working considerably more interesting and intensive in the future.”

A blend of nations: it works!Off to the North! Student excursion to Hamburg.