A portrait: Dr. Nicola Huson, Head of the German Department

She knows exactly what her students are going through. She can empathise, because she has lived in so many different countries herself. Her father was transferred to different bases and took 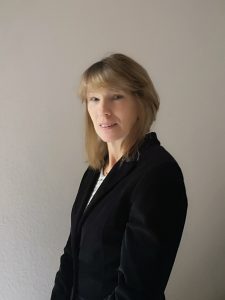 the family with him while she was growing up. New country, culture, language and school – that is nothing new for Nicola Huson.

She inherited her inclination to work abroad from her parents and has travelled extensively with her family. She has accepted and taught in teaching positions in many countries: for example, Cyprus, Tunisia, Qatar, Oman, and Jordan. Her children attended international schools while living abroad. That is why she can understand students at the German International College so well and can empathise with them in class.

When she was asked, which country she liked the most, she answered, “Oman. A beautiful country with nice people. They are friendly, polite and humble.” Still, she has learned a lot from each country and culture she lived in. In her free time, Nicola Huson likes to do things with her family, which is trilingual! Her husband’s mother tongue is Arabic and their three children speak German, English, and Arabic. Each language played an important role in a specific phase of their lives. The country of residence and children’s schools were always significant in defining which language was spoken predominantly. When she can, Nicola Huson likes to relax with a book.

It is not easy to teach German at an intensive pace in preparation for university. Teaching an intensive course requires knowledge and creativity from the instructor as well as diligence and perseverance from the students. Everyone has to be highly motivated. The German International College programme’s concept includes changing instructors at least once a day. On some days, only German is taught by several different teachers. On other days, the German lessons are interspersed with other subjects, such as Maths or Physics. That way each instructors’ personality and diverse teaching methods can be brought into play, stimulating the students in different ways.

It is easier to take intensive German courses here than at home in preparation for studying in Germany as students can use the language directly on a daily basis. Nicola Huson can give her students the advice to “be willing to study independently and work hard.”

Back After the Holidays