Even the most industrious students need to take time out from their desks now and again. So on 16 March we said to ourselves: Let’s leave the routine behind and go out and have a good time! This year, the itinerary we planned for our students included a four-day excursion to Hamburg with a stopover in Bremen. Every year, our participants travel to a different European metropolis. 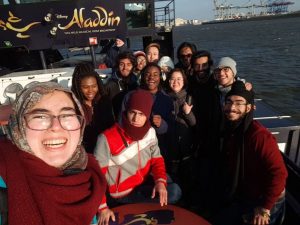 86 students and their supervisors set off for the North in two coaches. In the fashionable Altona district, our troop then checked into the hotel which turned out to be a cosy home base from which they could quickly reach many of Hamburg’s sights – either walking or by train.

The very next morning, text books were swapped for city maps and everyone plunged into the hustle and bustle of the big city. First of all, there was a bus tour with several stops and a guided tour in English. The highlights included the Elbphilharmonie, Hamburg’s new concert hall, and, in particular, a visit to the Michel, the most significant Baroque church in Germany. “We were greatly impressed by the organ music in the Michel”, Lina Bofenschen, Social Coordinator at Scientific Freshers, tells us. “For many of our participants, it was also their very first visit to a Christian church.”

Iran, Indonesia, India, Cameroon, Nigeria and China are the home countries of most of the participants taking part in our programme. The youngest of our fellow travellers were only 16 years old. For Rameez that meant one thing: Loads to do. The likeable Indian is not only a student but also a supervisor. He had to make sure that none of his “fledglings” got lost and that all of the instructions were understood – even by those whose English is not yet that strong. “We had lots of fun and everything worked out well”, Rameez happily reports.

The charm of the Hanseatic city rubbed off on the group and they enjoyed the cultural and culinary diversity of the metropolis despite the wind and icy cold. Pub visits, shopping tours, two 18th birthdays and cooking fresh fish from the world-famous Hamburg fish market together with the parents of one of our participants who were also visiting Hamburg made this trip an exciting and wonderful experience for everyone on board.

Our photo competition – under the heading: “Here we are at our favourite place in Hamburg” – produced some superb photos. The organisers of the trip counted over 60 entries. Our award ceremony is set to take place soon at the Scientific Freshers summer festival.

On the return journey, the group took a small detour to Bremen where they spent several hours exploring the town on their own.

Well prepared for embarking on student lifeParty time in Bedburg-Hau